Diane graduated from St. James Collegiate in Winnipeg.  She joined the Winnipeg Wesmen in 1983 and went on to win three national championships. During her university career she was named a Wesmen Female Athlete of the Year, Second Team All-Canadian, First Team All-Canadian, CIAU Player of the Year, CIAU National All-star, and CIAU National MVP and Howard Mackie Award winner as the CIS Female Athlete of the Year in 1993. From 1985 to 1991 she was a member of the women’s National Team and during that time participated in World Student Games, Goodwill Games, World Cups, World Championships, and many other international tournaments. She also had success playing senior women’s volleyball winning a national title in 1985 and a national finalist in 2001.

She played professional in Germany for three seasons before taking over as the Head Coach of the University of Winnipeg’s Women’s Volleyball Program in 1995 (recently finished her 24th season). As a coach she has been recognized with several honors including the 2011-2012 CIS Women’s Volleyball Coach of the Year. She was also named the GPAC Coach of the Year and led the Wesmen to a Semi Final Finish in 1995-96, and a CIS Silver Medal in 2002-03. She has sat on various CIAU/CIS Committees, helped in a coaching capacity for many Senior Women National Team Camps and was a member of the Manitoba Volleyball Association Technical Committee for a number of years. 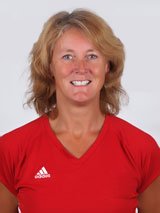