I am an executive director with Alberta Volleyball with my portolio being – developing Coaching and Officating! I have coached all levels with the Central Alberta King and Queens Volleyball Clubs from U13 up to the RDC Kings Men Team in 2006-2007 where we WON the National Championship for our 8th year in a row!!! Setting a record in North America!!! Our fabulous players and coaching team will be getting inducted to the Alberta Sports Hall of Fame June 3rd for our achievements with RDC Kings legacy.

I have had many fabulous opportunities to work and grow my coaching abilities with TOP level coaches in Alberta, Canada and the United States!!! Mentors and friends like; Keith Hansen, Terry Danyluk, Lorrie Eisler, Ken Briggs, Greg Ryan, Lee Carter, Carsten Stanjeck, Chris Wandler, Talbot Walton, Russ Rose, John Kessel, John Dunning to name a few!!! From all of these OUTSTANDING coaches I have absorbed the passion and dedication to life long learning to continue to make my coaching TOP NOTCH!!!

I absolutely love coaching athletes having them grow and excel in the sport they love!!! I have coached Alberta Club Volleyball in both the boys and girls. I pride myself in having a large number of my athletes who want to pursue volleyball at the highest level go on to post-secondary and be tremendously successful!!! 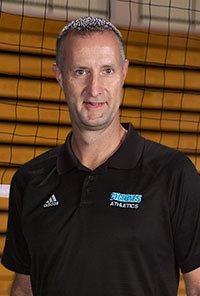