Laura was born and raised in Winnipeg, Manitoba. Her volleyball career started here where she captured 4 consecutive Provincial Championship gold medals as well as bronze and silver medals at National Championships throughout her career. She was named the #1 Manitoba Varsity Female Volleyball Player in the 2013 Winnipeg Sun Coach’s Poll. Laura moved to Calgary following high school and played all 5 years for the University of Calgary Dinos, capturing gold in the Canada-West Championship in her final season. Laura graduated from the University of Calgary in 2018 with a Bachelor of Kinesiology and is currently completing her diploma to become a Diagnostic Medical Sonographer.

Laura’s coaching experience began in her final year of high school where she has now gained experience at the high school, club, provincial and university level. 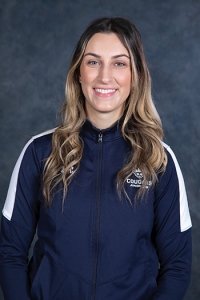