Tommy expanded his love for volleyball under Ard Biesheuvel at LCI High School, where the team won a gold and two silver 4A Provincial Championship medals over three years. Following a national championship season with Red Deer College in 2016, Tommy moved on to professional volleyball in Sweden as both a player and head coach.
Tommy has had the privilege to play under great coaches during his career and attributes his success in volleyball to the dedication and philosophical teachings of those coaches. Tommy advocates the importance of cognitive development in conjunction with physical development.

As one of our youngest and most enthusiastic coaches, Tommy’s coaching style provides contribution as an experienced player and coach and allows him to relate to players in a direct, powerful way and on a personal basis. Tommy is committed and dedicated to providing learning and experiences to the generations to come.
Tommy was raised in Lethbridge, Alberta and currently lives in Calgary where he looks to advance his competence as a coach and provide back to the future of volleyball. 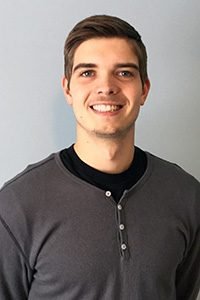